Today’s walk comprised more outstanding Galician scenery, as the first few kilometres rose quite sharply and afforded similar spectacular views to yesterday. I continue to be confused by what I read and hear about the highest point on the walk. My understanding was that we reached it a few days ago at Cruz de Ferro, then we apparently went higher again. As we reached the top of a particularly steep section today (to be greeted by an oasis-like cafe bar – another great moment in sport) somebody claimed that in fact, this was the ultimate pinnacle of the Camino. “Incorrect!” cried Carolyn. “ Today is the highest point in The Galician stage of the Camino!” So now you know: we’ve managed to scale two highest points in the course of our journey!

There was, consequently, a lot of downhill walking from then on, something neither of us particularly enjoys, particularly on uneven dusty paths where your boots keep filling up with stones. It was not, however, all bad. I strolled for an hour with our Australian friend John, who is 73 (doesn’t look anything like that) and seriously fit. He’s a cyclist, as in the kind of cyclist who’s cycled several stages of the Tour de France route, including Alpe D’Huez. I’ve been driven up that road to the ski resort and the gradient beggars belief. He did it when he was 70!

He regaled me with interesting anecdotes about cycling in Australia with Lance Armstrong. He now does some driving for an elite sporting chauffeur service and has looked after the Federer family and Andre Agassi/Steffi Graf, among others. When you pair up with someone interesting, the miles fly past. I even learned that Porsche used to manufacture tractors before sports cars became their forte!

We passed through quite a number of villages today with names such as Hospital de la Condesa, Alto de Poio, Fonfria and Fillobal. All were very small, rural places, where cows wearing bells would be getting herded past us at regular intervals. They all had serious sets of horns which appeared to have been blunted for obvious reasons. Still looked pretty formidable, though. The dominant smell of today’s journey was the pungent aroma of cow dung, a fruity, rascally bouquet that lodged itself in your nostrils and refused to leave. Aahh, Eau de Coo, for the sophisticated traveller.

The weather remains outstandingly good, with cloudless skies, bright sunshine (you’ll be sick of hearing this) and high temperatures. Admittedly by midday it makes walking a bit more demanding, but I wouldn’t change a thing. Who wants to walk in the wind and rain, with your views obscured by thick, all enveloping damp fog? We’ve had more than enough experience of that over the years. This is the business!

A huge plus for Triacastela : we’ve just had the menu del peregrino at Restaurante Complexo Xacobea. It was quite outstanding, with three excellent courses, bottle of wine, water and bread for ten euros each. Terrific ! Coffee has just arrived (that’s extra, but what the hell!) so I must wrap this up and hand it to the proof/map reader/ navigator, whose jacket, in a moment of post-meal magnanimity, I have removed from the shoogly nail. This Camino is getting me all touchy-feely. Where’s that tree?

Tomorrow we’ve decided to add 6km to our journey to take in El Monasterio de Samos, which is one of the most important religious buildings in Galicia. I hope it’s worth it!

Today’s album track is “Mountain Climbing” by Joe Bonamassa, because for the last couple of days we’ve been climbing higher and higher, as Carolyn has just pointed out. 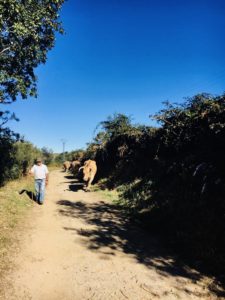 Astorga to Rabanal Del Camino “The big picture doesn’t just come from distance; it comes from time” A terrific walk […]

Looking to get involved?

You can find out more about which cookies we are using or switch them off in settings.

This website uses cookies so that we can provide you with the best user experience possible. Cookie information is stored in your browser and performs functions such as recognising you when you return to our website and helping our team to understand which sections of the website you find most interesting and useful.

You can adjust all of your cookie settings by navigating the tabs on the left hand side.

Strictly Necessary Cookie should be enabled at all times so that we can save your preferences for cookie settings.

If you disable this cookie, we will not be able to save your preferences. This means that every time you visit this website you will need to enable or disable cookies again.